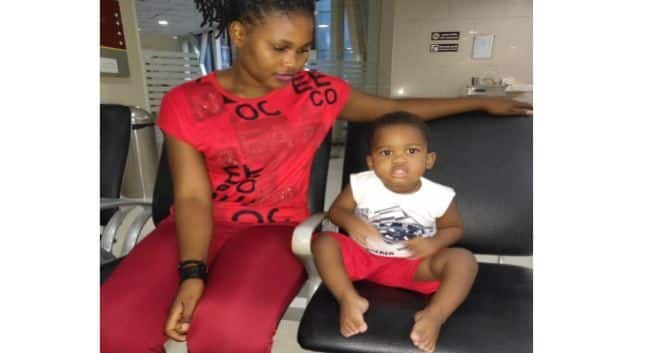 StemRx Bioscience Solutions Pvt. Ltd. successfully treated a 21 months’ old kid Alfa from Uganda who was unable to walk due to a rare neurological disorder called “Sturge-Weber Syndrome (SWS)” that affects the development of certain blood vessels, causing abnormalities in the brain, skin, and eye. It is the 1st case of SWS treated in India using cell based therapy helping the baby walk tall.

Everything was normal till Alfa was 14 months old, when he suddenly suffered febrile seizures(fits during fever) along with shortness of breath in July 2018. Parents took him to local medical facility for treatments in Uganda. It was shocking for parents when during the treatment at the hospital, the baby suffered another episode of fits and went in to coma for about 3 weeks.  Further diagnosis and CT scan confirmed infection in brain and surrounding tissues due to Sturge-Weber syndrome.

For getting a good care for baby Alfa, her parent decided to come to India; were they met Dr. Pradeep Mahajan, Regenerative Medicine Researcher at StemRx Bioscience Solutions Pvt. Ltd in September 2018, for cell based therapy.  “After a thorough examination 2 sessions of cell based therapy was given to the kid. A holistic approach with daily allied therapies such as physiotherapy, yoga and hyperbaric oxygen therapy was employed which started giving dramatic results.”

Earlier, Alfa had symptoms of sudden head dropping, neuromuscular in-coordination, vision impairment, difficulty in sitting and standing, irritability, minimal facial expressions with no verbal appreciation and negligible concentration. His developmental milestones were delayed since recovery from the coma. After the session of cell based therapy and rehabilitation, Alfa’s mother said, “My son can now sit without support, stands with support, responds appropriately to sounds, has better head control with negligible head dropping and is showing signs of milestone development according to his age.”

What is Sturge-Weber syndrome?

SWS is a condition that affects the development of certain blood vessels, causing abnormalities in the brain, skin, and eyes. SWS is estimated to affect 1 in 20,000 to 50,000 individuals. Classically, a congenital facial birthmark may be present along with neurological abnormalities. The condition is genetic, caused by mutation in GNAQ gene, and the resultant protein expressed by this gene regulates signaling pathways to help control the development and function of blood vessels.

The hypothesis is that, there is persistence of vascular plexus around the cephalic portion of the neural tube, which develops during the sixth week of intrauterine development but normally undergoes regression during the ninth week. There is usually abnormal formation and growth of blood vessels within the two thin layers of tissue that cover the brain and spinal cord. This abnormality can lead to formation of angioma (tumor derived from vascular cells), which can impair blood flow to the brain and lead to atrophy of brain tissue and calcium deposition in the brain.

The decrease in blood flow can cause stroke-like episodes, leading to paralysis/weakness in limbs etc. Patients may present with varying levels of cognitive function, from normal intelligence to intellectual disability. Ocular involvement can result in glaucoma, choroidalhemangioma, buphthalmos (enlargement of eyeball), or hemianopis (altered vision in half the visual field).

Is HTC making the next Pixel phones for Google?

One of Windows 10’s biggest new features has been DELAYED

Jony Ive Is Leaving Apple to Start His Own Design Firm