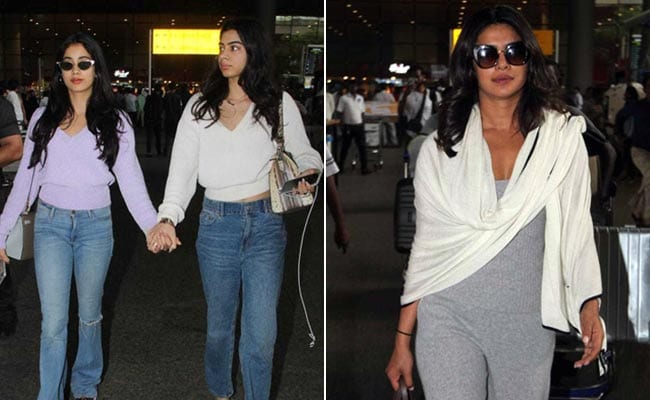 After being a part of Isha Ambani’s engagement celebrations in Lake Como in northern Italy, celebrities like Priyanka Chopra and Janhvi Kapoor made their way back to Mumbai earlier today. Isha Ambani’s engagement bash seems to have been a star-studded, grand event; when your father is Mukesh Ambani, that is perhaps a given. While Priyanka Chopra and Janhvi Kapoor looked fabulous during their short stay in Italy, the two made sure to look just as fantastic while making their way back into India. Long-haul flights have got nothing on these two style divas, who managed to look super fresh and, no doubt, rather chic in their airport ensembles.

Priyanka Chopra was spotted earlier today at Mumbai airport wearing a grey co-ord set. Her outfit featured simple knit grey pants and a matching top. She paired her outfit with a white stole with black edging, a Gucci bag and a pair of pink, velvet, pointed toe slides. Priyanka’s oversized glasses and makeup free skin really seems to have worked for her.

While in Italy, Priyanka was seen wearing a nude and gold embroidered sareefrom designer Manish Malhotra. She looked absolutely resplendent as she posed with the designer himself and her fiance Nick Jonas.

Janhvi Kapoor looked like an absolute star this morning at the Mumbai airport as she walked out hand in hand with her sister, Khushi Kapoor. Janhvi was spotted in a pair of blue bell-bottomed jeans, a simple lavender cardigan and a pair of sneakers. What really added to Janhvi’s glam quotient was her sleek pair of sunglasses.

While in Italy, Janhvi chose to wear a beautiful black lace and sequin patchwork gown from designer Nedret Taciroglu. Janhvi looked stunning with her hair down in loose curls and her bright coloured lips.

Whether at the airport or at fancy events, Priyanka Chopra and Janhvi Kapoor are proving, one look after another, that they are inimitable when it comes to their sartorial choices.

Back pain is associated with unhealthy behaviour like smoking, drinking