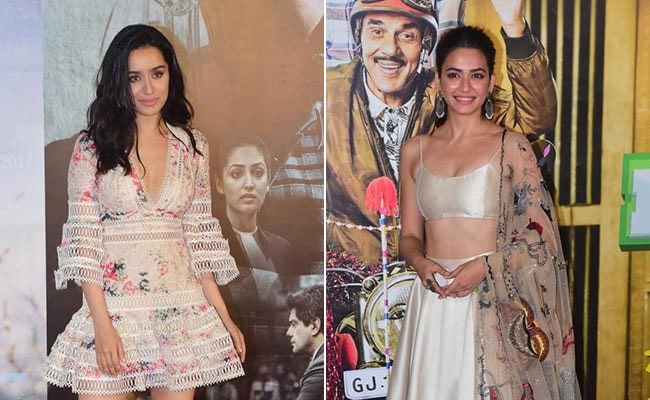 Regardless of the fact that it’s the midst of monsoon, Bollywood has shown that white continues to reign as the shade of the season. From Malaika Arora in a flouncy off-shoulder dress to Janhvi Kapoor in a relaxed white co-ord set, celebrity style has spoken in favour of white being the right choice this season. Adding to the fashionable white bandwagon are the two newest wearers of the hue, Bollywood actresses Shraddha Kapoor and Kriti Kharbanda. The two attended their own respective film promotions in various white tones and gave their own spin to the ivory trend.

First up, there’s the lovely Shraddha Kapoor. For the trailer launch of her upcoming movie, Batti Gul Meter Chalu, Shraddha opted for a pretty printed dress which was pleasant step aside from her recent looks. Shraddha wore a white Zimmermann dress with beige tones and pink floral print with a deep neckline and white peekaboo detailing. She paired the outfit with strappy sandals, wavy hair and a neutral makeup look with pink lips.

Then there was the delightful Kriti Kharbanda who attended the trailer launch of her upcoming movie Yamla Pagla Deewana: Phir Se. Kriti opted for a traditional look in a white Sunaina Khera lehenga. The satin lehenga was solid toned and high on sheen. The only busy element was an embroidered sheer dupatta, which was a brilliant addition to the look. Chic without going overboard, just the way we like it. Kriti paired it with jewellery from Motifs by Surabhi Didwania, bold brows and a voluminous ponytail.

Both actresses, one in a western look and the other in Indian wear, pulled off their looks in their own way. Their white tones were peppered with bright prints and beige hues which made sure they don’t look dull. It’s all the proof we need to believe that the white trend will continue this season, with fresh details and more colour to add life to it.

Diwali 2018: 5 Diwali Sweets that May be Adulterated

Amazon has unveiled an early peek of Prime Day deals