Nokia 9 is yet to go official, but leaks around the device have started to surface online. The latest one comes from benchmarking site Antutu, revealing Snapdragon 835 processor for the upcoming flagship device. Further, Nokia 9 is said to run Android 7.1.1 Nougat and GPU will be Adreno 540.

Nokia 9 bears model number TA-1004. It will features a QHD display with a resolution of 1440×2560 pixels. Nokia 9 will come with 4GB RAM and 64GB internal storage. The site lists camera specifications as 13MP+13MP. Whether this means a dual rear camera setup with 13MP sensors each or rear+front camera, is unclear. 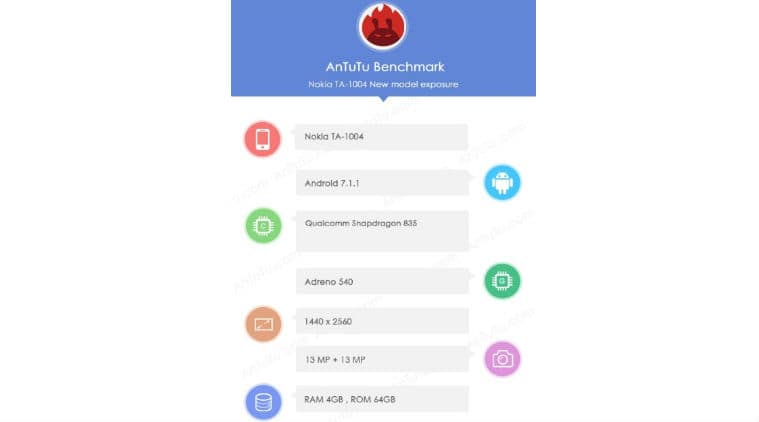 FrAndroid, which claimed to get their hands on a prototype of Nokia 9, revealed a vertically aligned dual 13MP rear camera setup, 5.27-inches WQHD display with a resolution of 1440×2560 pixel, 4GB or 6GB RAM, along with 64GB internal memory.

Other rumours point at smaller bezels and no physical home button. The home button and a fingerprint scanner are expected to be placed on the back side of the phone beneath a dual lens camera system.

The report needs to be taken with a pinch of salt given the company has not yet officially confirmed details about its upcoming smartphones, including Nokia 9.

Bareilly: Over 15 lakh children to be vaccinated for measles, rubella from Nov 26

iPhone 7 Was the World’s Bestselling Smartphone in Q1 2017: Strategy Analytics