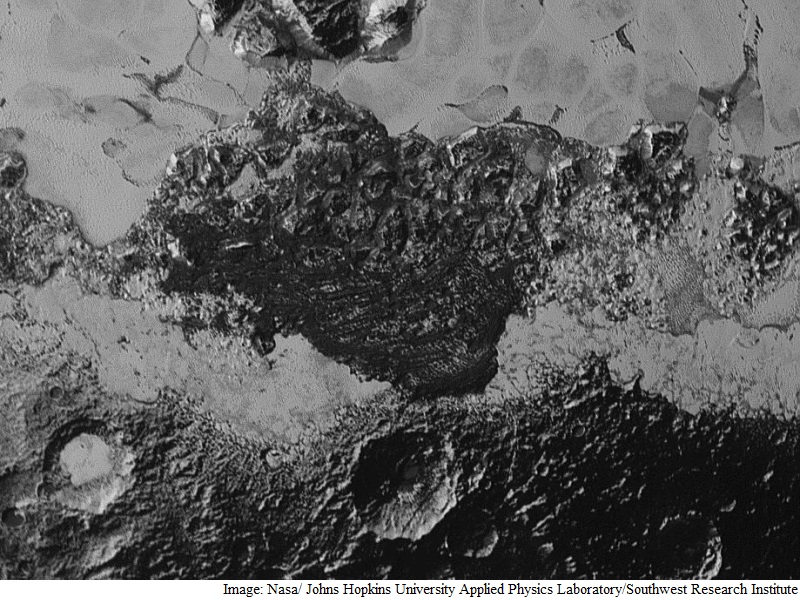 New sharp images of Pluto have revealed a bewildering variety of surface features that have left scientists reeling because of their range and complexity.

Taken from Nasa’s New Horizons spacecraft, the images reveal new features as diverse as possible dunes, nitrogen ice flows that apparently oozed out of mountainous regions onto plains, and even networks of valleys that may have been carved by material flowing over Pluto’s surface.

“Pluto is showing us a diversity of landforms and complexity of processes that rival anything we have seen in the solar system,” said New Horizons principal investigator Alan Stern from Southwest Research Institute (SwRI), Boulder, Colorado.

New Horizons has begun its year-long download of new images and other data.

“The surface of Pluto is every bit as complex as that of Mars,” added Jeff Moore from Nasa’s Ames Research Center in California.

The randomly jumbled mountains might be huge blocks of hard water ice floating within a vast, denser, softer deposit of frozen nitrogen within the region informally named Sputnik Planum, he explained.

New images also show the most heavily cratered and thus oldest terrain yet seen by New Horizons onPluto next to the youngest, most crater-free icy plains.

There might even be a field of dark wind-blown dunes, among other possibilities.

“Seeing dunes on Pluto if that is what they are would be completely wild, because Pluto’s atmosphere today is so thin,” noted William B. McKinnon from Washington University-St Louis.

Images returned in the past days have also revealed that Pluto’s global atmospheric haze has many more layers than scientists realised.

The haze actually creates a twilight effect that softly illuminates night-side terrain near sunset, making them visible to the cameras aboard New Horizons.

The spacecraft is healthy and all systems are operating normally, Nasa reported.

The 10 Best Sandwiches from Around the World

5 winter illnesses you need to protect yourself from